Memories and Adventures is a 1924 autobiography by Sir Arthur Conan Doyle, the late-Victorian writer most famous for his creation of fictional detective Sherlock Holmes. Doyle was a physician, a Spiritualist, and a prominent public figure. His autobiography describes his adventures whaling in the deep Arctic, his experiences in medical practice, his religious epiphanies, and his efforts as a British apologist during the Boer war. Although Holmes is a figure of central interest to scholars concerned with fin de siècle culture, fan studies, and the literature of detection, Doyle’s autobiography has received relatively little critical scrutiny, and the majority of the scholarly attention it does receive is in introductions to collections of Holmes stories as a source of biographic material. To an extent, this is unsurprising—Doyle’s Spiritualism, for example, seems incongruous, given the empirical tendencies of his most famous creation. However, the book holds some special appeal from a history of science perspective, and an annotated edition, backed up with letters, images, and historical background, would provide an original biographical perspective on the complex figure who conceived the Great Detective. 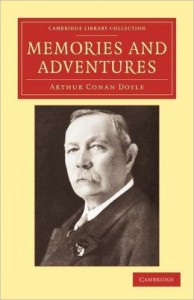 Memories and Adventures is an ideal length for a scholarly edition, and creating such a work would be a worthwhile contribution to Holmes studies. However, the creation of a digital scholarly edition could also be limited to the initial release of a small set of annotated Holmes stories rather than a full critical edition of Doyle’s autobiography, a move that could provide a proof of concept. Thus, my MVP could be a set of critically annotated Holmes stories presented on an existing cross-platform publishing platform, such as iBooks or an open-source alternative.

A more substantial version of the project would be a Holmes digital archive or Doyle omnibus, which would be a much more substantial undertaking. Alternatively, I could focus more on the platform, rather than using preexisting tools to create a larger book-length commentary. This would actually be timely, since as of now there are actually few satisfactory or comprehensive alternatives for publishing critical editions online—most current platforms are focused on textbooks or lack features that make them attractive on tablets. (I’m looking at you, Scalar.)

Whether I go with the short stories or the full edition, an intertextual, archival, and multimedia approach built on a modern distribution platform would enable the digital edition to go beyond critical commentary to include some of the elements of an archive. A digital edition constructed around the capabilities of the modern tablet could incorporate high-resolution images and illustrations, “tours” of prominent locations, interviews with Doyle scholars, facsimiles of original editions, and other materials usually reserved for an archive.

I’m so sorry I can’t join you in class tonight, and that it’s take me a while to get over here to post this for you. I’ve been away from my computer more in the past week than any time I can remember since I had a newborn almost 8 years ago. I’m usually more readily available. When we were together last week, we tried to watch the brief video of the Gimlet Media design sprint they did with Google Ventures. I’m putting it here for discussion. Gimlet is the company whose inception and launch have been chronicled in the Start Up podcast, which is a worthwhile listen if you have the time. If you don’t have the time for the whole series, I would recommend listening to Episode 13, “Fake It Til You Make It”. The whole series is an interesting look at how you go from having a big but amorphous idea and shaping that into reality. Of course in their case, pitches and investors are involved, but many of the questions they struggle with–what kind of a company are we? do we do tech or content or both? do I know enough to do this? how do I fix my mistakes?–are about far more than profits.

Have fun further defining your ideas and getting real, as it were. I can’t wait to see what’s around the corner for this class.