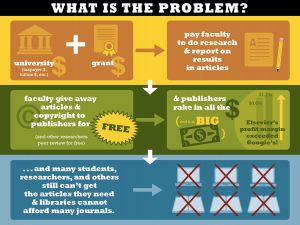 “All that time we lavish on convincing students that scholarship matters is wasted if we can’t be bothered to make it accessible to graduates for something less than, say, $45.00 per article.” – Barbara Fister

Barbara Fister’s statement (Fister, an MVP in academic library land) hits the nail on the head for me. Why do students citizens relinquish the right to access information once they leave the academy? Why trouble with teaching at all if knowledge access is reserved for a privileged few years in college only?

Ashley Dawson sums up the teetering system of scholarly production and dissemination as follows:

“The upshot is an increasingly Darwinian world of frenetic competition and commodification in which scholars illogically hand over their hard-won knowledge virtually for free to presses that then limit the circulation of that knowledge through various forms of copyright in order to maintain the precarious revenue stream that keeps them in business.”

Open access is an ethical issue, a money/labor issue, and a political issue.

While the open access movement (led voraciously by librarians) soldiers on for free/unrestricted access to scholarship, academic capitalism and the traditional academic tableau (scholar hermit gifts esoteric work in print monograph or gold standard journal article) continues to snake through the system of tenure and promotion. The result is that a majority of academics are held hostage at a time of great shifts in knowledge production, increased collaboration, digital transformation, and new modes of information dissemination. The traditional formula for measuring scholarly accomplishments no longer fits and it is difficult to measure scholarly work when notions of authorship and knowledge production are changing- this is mainly because the system is incredibly inflexible and has relied far too much on unpaid, immaterial labor. It’s not like scholars have ever been paid to do peer review.

Open Access comes at a cost
Creating, editing, presenting, and preserving the work is not free and we’re at a difficult moment where a lot of this labor risks going virtually unnoticed and unremunerated. In the case of several new open access initiatives at CUNY, Academic Works, the University’s institutional repository, and the development of open educational resources (OERs) as alternative course materials at various CUNY campuses, much of the support and administration is planned to be absorbed by CUNY’s 28 or so academic libraries but it remains to be seen how exactly libraries will find the resources to do this.

As a participant in an OER pilot at my CUNY campus, I am also concerned about the amount of awareness and marketing that still needs to be done around open access issues. It’s also a delicate matter depending on who you talk to. Librarians tend to be among the most invested in the movement, and so it’s important to grasp the different concerns around this major shift in scholarly communication. Throw in intellectual property, copyright, and licensing, and you’ve got one complicated discussion.